Well, we just made it through an amazingly BUSY time....

Its finally a bit quieter.... But we do have a residencey at The Yarra Hotel in Melbourne all this month and we head to South OZ in Early MAY...

We are preparing to record our new EP. The songs are all written, we are fine tuning them right now... Make sure you come to the Yarra Hotel to get a sample!

We have written 5 new songs, (some back home, and some in Bayonne.)

We aim to start recording them this April... possible with Robin Mai at Woodstock studios.

Some great gigs coming up with the band as well...Ross McLennana, Steph Hughes on drums (from Dick Diver)

We are really looking forward to the whole experience.....

New wave balladeers Victoriana Gaye return to Australia after 4 months touring Europe and the UK. Jeff Raglus and Vicki Gaye Philipp peddled their lo-fi indie sounds to London, Brighton, Southampton, Liverpool, Glasgow, Edinburgh, Copenhagen, Berlin, Leipzig, Amsterdam, Bordeaux, Bayonne and beyond to include many towns along and around the Cote de Basque .

Not ones to rest on their laurels, the pair are currently writing songs for their 4th album and have launched straight into a stretch of Victorian shows, eager to flex their ‘gig fit’ muscles.....

VG at the Falls!! 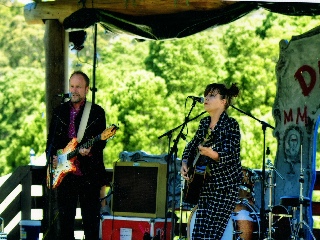